I don’t know what the Bose QC35-ii is doing: the Action button refuses to do anything unless it’s sure it’s talking to either Google Assistant or Alexa (no Siri mentioned in the app, interestingly).

I can’t get the 2021 version of the Star Trek TNG Bluetooth Combadge to trigger anything when connected to a Linux machine. The regular press is triggering KEY_PLAYCD and KEY_PAUSECD, thus mapping onto the relevant X events and interacting well with my desktop’s media players (particularly Chrome) — but doublepress, which normally activates Siri on my iPad, sends no input device events on the relevant /dev/input/event* special file. There’s just no traffic.

btmon is an interesting discovery, and it pointed me in the direction of the world of AT commands flowing as ACL Data on my local hci0 device. Many of the ones flowing are documented on Qt Extended’s modem emulator component documentation from 2009: it starts with the combadge sending AT+BRSF and seeing a response, then sending AT+CIDN and getting and response, and so on and on and on. 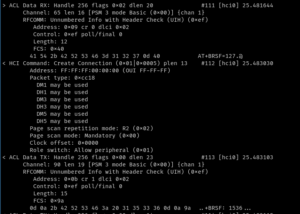 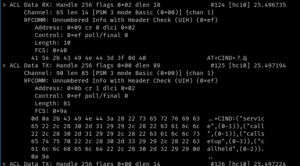 If I am reading everything right, the values returned are decimal numbers representing a binary mask. btmon output seems to indicate the combadge (‘hands-free’ device) claims it supports 127 (i.e. all 8 functionalities in the Modem Emulator docs), and the desktop (‘audio gateway’) says it supports 1536, which is binary 110 0000 0000, meaning the only bits that are set are in the reserved range from the perspective of the 2009 Modem Emulator documentation.

A list of flags can also be found in 2013 bluez test for HFP. Over there, one of the formerly ‘reserved’ bits is specified as being AG_CODEC_NEGOTIATION, but we can luckily find the other one in ChromiumOS’s source code: inside something called adhd (apparently, ChromiumOS Audio Daemon) and its cras component’s server part, the constants are in cras_hfp_slc.h. So, the other bit the desktop claims to support is AG_HF_INDICATORS, which also has nothing to do with remote control.

That source code also indicates we can read the Hands-Free Profile specification, the latest one being version 1.8 available on Bluetooth.com.

So, if I am interpreting everything correctly, the combadge says it supports “everything”, but the desktop doesn’t tell it back that it knows what voice recognition is. No wonder we’re not seeing any traffic.

So, we don’t quite need to support Apple-specific HFP commands such as AT+XAPL (bluetooth accessory identification), AT+APLSIRI (confirming the device supports specifically Siri) or AT+IPHONEACCEV (sharing battery level), which is nice. Both of the platforms documented by the combadge’s marketing materials and the manual (Google Now i.e. Assistant and Siri) document they support AT+BVRA from the Hands-Free Profile specification; see Google Assistant’s “Voice Activation Optimization” document for Bluetooth devices, as well as the “Accessory Design Guidelines for Apple Devices (release R16 talks about this in section 30.3.1).

Instead, it looks like we mainly need to trick the desktop to respond to combadge’s AT+BRSF request with a bitmask that includes the voice recognition bit, and move on from that, hoping the combadge starts emitting AT+BVRA, and that we can easily programmatically capture that!