I upgraded the PHP version backing my WordPress setup to PHP7.3. Of course, something had to go wrong:

There's no updates for jquery-syntax plugin that I'm using. Let's assume that the author will fix this if they ever release an update.

For the time being, opening jquery-syntax.php manually and editing jq_syntax_quote to replace passing what looks like a function object (is it in PHP? I can't be bothered to check) with a string when invoking preg_replace_callback() does the trick:

Note how jq_syntax_htmlentities received single-quotes around it.

A few years ago, I wanted to use Bazel to build an old project of mine using Visual Studio 2017 Community.

Thing is, I don't install most of MSVS on my system partition, as it's on a relatively tiny SSD. So, where do I (portably) find it? And how do I set BAZEL_VS (per their documentation) to the correct path?

As I'm much more comfortable writing Bash scripts than writing old DOS-style Batch scripts, and as I'm going to have msys64 (or at least msys32) on my machines, clearly the answer is to write the resulting launcher in Bash. There are downsides to this approach, but it's doable.

Do you even need this for Bazel?

Unfortunately, I have a genrule that depends on bash, which didn't work in cmd.exe even if I specified BAZEL_SH (missing binary for basename). And when I didn't pass BAZEL_SH while running under MSYS64, it had trouble finding SDL/SDL.h presumably because the aforementioned genrule didn't work.

You may want this for non-Bazel uses.

Assuming Bazel 2.0.0 is installed in C:\bazel under the default filename from the release on Github, this does the trick:

Unfortunately this is broken as of MSVS2019. See the explanation why that registry key is not used anymore.

The new situation is better: there's a tool that does get installed in a well-known path: %ProgramFiles(x86)%/Microsoft Visual Studio/Installer/vswhere.exe.

The problem is merely that Bash doesn't like parentheses in environment variable names, so ${ProgramFiles(x86)} won't be acceptable. However, it was visible in env output! Other people have spotted the same thing, but as their writings talk about PROGRAMFILES(X86) in all caps, I've concluded that maybe it's better to add the I flag to their sed-based solution.

The problem with using Bazel integration into VSCode is that it wants a path to Bazel. But Bazel wants to have BAZEL_VS set.

Maybe I could work around this by writing a tool in a compilable language, then have it pass on all CLI arguments to actual bazel.exe, while also setting BAZEL_VS. Or maybe Bazel supports some settings in .bazelrc. I didn't care to check. Instead, I've used msys2_shell.cmd as the 'shell' for the integrated VSCode terminal. I'm used to manually running Bazel and I don't care enough about interactive debugging. For now, I just don't care enough to properly integrate Bazel into VSCode on Windows (though it would be neat).

Why even bother with Windows?

My program still works on Linux, built whether with Bazel or using Makefiles; but the deprecated SDL 1.2 was recently broken on macOS, my program won't work on macOS.

Getting this to work is also a nice exercise. 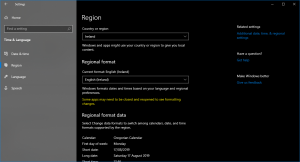 I finally found the solution to the issue on the GOG.com forums. Nothing obvious like setting admin privileges helped.

No, it's more insidious.

Apparently when you go to regional settings, both the "Country or Region" and the "Regional Format" values must match the country.

Changing the values to "Ireland" + "English (Ireland)" resolved the issue.

Previously I thought I would not head to Brussels this year, but it turned out I will. Let me know if you'd like to meet. I'm not sure if I'll go to the beer event.

This year I hope to meet up with people interested in fediverse-related interop. Here's a meetup thread.

I've also created an XMPP chatroom for meeting fediverse folks, in case realtime chat is needed; see xmpp:fediverse@muc.badc0de.net?join1. There's a small web UI at https://badc0de.net/fosdem/2019/fediverse/2 and an IRC frontend3 at irc://irc.badc0de.net:6667/#fediverse; please join #fediverse manually. No guarantees about reliability of the XMPP server, of the HTTP proxy4, of the web UI, or of the IRC frontend. 🙂

On a related note, it's disappointing that there's a social fragmentation between Matrix, fediverse and XMPP, but eh. It would have been nice if ActivityPub was (like OStatus protocol suite before it) based around XML and Atom; it would have made pushing for supplanting the under-utilized XEP-0277 and its urn:xmpp:microblogging:0 with something that had a model of favoriting and commenting similar to fediverse.

Alas, to be useful now would probably require imagining ActivityPub 2.0's model and vocabulary over XML, and use Atom for posts and activities. shrug

Once again, it's time to write down some notes for personal use. Let me know if what I'm jotting down here is particularly wrong.

PostgreSQL can tell you what are the commit IDs that touched a particular table. You query the system column named xmin.

You can also ask for the timestamp when this commit was created; however, that requires you to start tracking timestamps for each commit ID.

This seems to be rather useful for built-in tracking of the modification timestamp and for etags. If the database backend is well structured, it may be possible to structure queries in such a way to quickly check when the results were last modified, and help the web frontend avoid serving and requesting the results. I don't have a clear way to do it yet, but while I don't think impact on the database will be significant, it may help shave off some serving bytes or requests to other backends.

Commit IDs also roll over after 32bit, so their use on a high traffic site needs to be closely considered. Then again, by the time you have over four billion writes, your caches will probably otherwise expire anyway.

Table pg_stat_activity is interesting and lets you see the transactions and even queries in flight. This'll be slightly messy, but click 'view raw code' to see the original formatting, and scroll around a bit.

A while ago I became available on fediverse (Mastodon, Pleroma, …) on the same address as usual: myname@mylastname.net (substitute as necessary).